In early January, I boarded the Orange Line at Downtown Crossing and headed north, bound for the newest stop in the Boston subway system: Assembly Square. I wasn’t going to Assembly for the novelty of a new train station—though I do love new train stations (and they are hard to come by in this nation of neglected public infrastructure). Instead, I was making a kind of pilgrimage, to find the new state park named after a man whose life I have been tracing out through hunted citations and the garbled results of endless searches in electronic newspaper databases. I wanted to find out who else had remembered this forgotten Boston reformer whose ideas and longings I have been trying to reconstruct across the clouded gulf of time, and to stand for a moment in the peripheral glow of a halo of a minor reputation.

I first learned that Sylvester Baxter had a park named after him while absorbed in one my favorite procrastination activities: panning over Google Maps and randomly flying down on places I’d like to know more about (it is possible to spend hours entranced in this way). I’d read about Somerville’s new Assembly Square project, and was curious to see what sort of development had been tucked in between I-93 and the Mystic River, where the Ford company once put together finned cars to sell to the proud heads-of-households of the postwar boom. As I zoomed in, I was shocked at the label hovering over the green strip just north of the development: Sylvester Baxter Riverfront Park.

That shock was on account of the fact that, if I may brag for a moment (that is, if what I am about to do counts as bragging at all), I probably know more about Sylvester Baxter than all but a handful of people living today. (The reader may gasp at this stunning bit of arrogance, but I feel confident saying I am a “1 percenter” in the domain of Sylvester Baxter knowledge. Imagine the triumphant, cocky swelling in my chest as I type these words!) That’s because Baxter is one the main character of the third chapter of my dissertation. For nearly thirty years across the late nineteenth and early twentieth centuries, Baxter was the foremost agitator for the consolidation of Boston into a regional metropolis. In pursuit of this dream, he editorialized endlessly, joined reform campaigns, and became secretary of the Metropolitan Parks Commission, the first regional park planning agency in the country. For this latter activity, Baxter occasionally makes an appearance as a minor character in books about the history of landscape architecture or the environmental history of Boston.1 But, as I’ve come to learn, Baxter’s role in shaping Boston went far beyond his work as a park administrator. He was an amateur geographer and nature writer, a prominent mouthpiece for the socialism of Edward Bellamy, an interpreter of British and German municipal reform policies, a bicycling enthusiast, and even a popularizer of modernist poetry. He was a living collection of the hodgepodge of liberal reforms circulating amongst New England’s Yankee middle class in the late nineteenth. And one of the themes that knitted together all of his various enthusiasms was the dream of a unified metropolitan entity, a Greater Boston, sanctioned not only by jurisdictional power but geographic reality.

So I walked out of Assembly Station, feet sliding wildly on the too-polished floor of the new platform, and headed out towards the Mystic River, over the crackless sidewalks of a just-laid parking lot, dusted that afternoon with the powder of a recent flurry. My laptop was nestled in my backpack, and on that laptop there is a crowded folder filled with every citation about Baxter that I’ve been able to scour out of the internet and libraries. Perhaps, I thought, there is no other hard drive in the world that has so many mentions of Sylvester Baxter recorded on it, this hard drive which was now about to be carried around on my back through Sylvester Baxter Riverfront Park. Was there any difference between this half-serious bit of scholarly pilgrimage and a fan who dresses up as Han Solo to eagerly meet Harrison Ford at a Star Wars convention? I was beginning to worry that there wasn’t.

The park, it turned out, was a pleasant-enough bit of contemporary riverfront reclamation, hardly twenty meters across and still looking a bit like a real estate marketer’s rendering in its barely-used newness. I hadn’t been able to find any clues as to why the DCR had chosen Baxter as the namesake of the new park, and I didn’t know if I’d find any trace of a memorial there. Walking up and down along the banks of the sluggish, cold Mystic, I found plenty of eerily clean trash cans, but no mention of Baxter, no statue of him triumphantly riding a parks commission horse to victory in the chambers of the state legislature’s minor conference rooms. Eventually I decided that the park bore the name but few other traces of the Baxter who I’d come to know, in a very strange and distanced way, almost personally.

It is an odd business, immersing yourself in the vanished worlds of people veiled behind the curtains of the past, reading their words and rebuilding their lives, following them throughout from youth to death and trying to reanimate the forces that made them go. As a geographer who is professionally supposed to care about places rather than people, I get even more anxious about the evanescent emotional bond that reaches out like trails of smoke from subject to author, and fear that the deceit of sentimentality fools me into mistaking a long-dead reformer for an intellectual companion-in-arms.

But I reminded myself, walking in this park that bears Sylvester Baxter’s name, just downriver from his hometown of Malden, that people and places are bound together—that, after all, is why I came here in the first place. Stephen Daniels and Catherine Nash used the term “lifepaths” in 2004 to describe the structural similarity between a biography and a map, emphasizing the ways in which the two can be overlaid on each other, such that biography and geography together form “a field traversed by the various ways lives are inscribed in time and space, plotted as both story-lines and routeways.”2

What better place to remind myself of this than on the shores of Baxter’s own Mystic River, its waters sewing together Boston’s northern suburbs, and in a park whose very existence was set in motion, at great remove, by the metropolitan system which Baxter so diligently built?

Along the Fellsway, a low cement wall inscribed “Sylvester Baxter Riverfront Park” in simple Helvetica seemed to be the only trace of Baxter I’d find here. Then I noticed, tucked on its back side, an inscription. Here it was: the unassuming memorial to Baxter that I’d been searching for. Next to a bas-relief by Bela Pratt, the DCR glossed Baxter in four terse sentences, emphasizing his role in obtaining the “critical open spaces of the metropolitan region.” 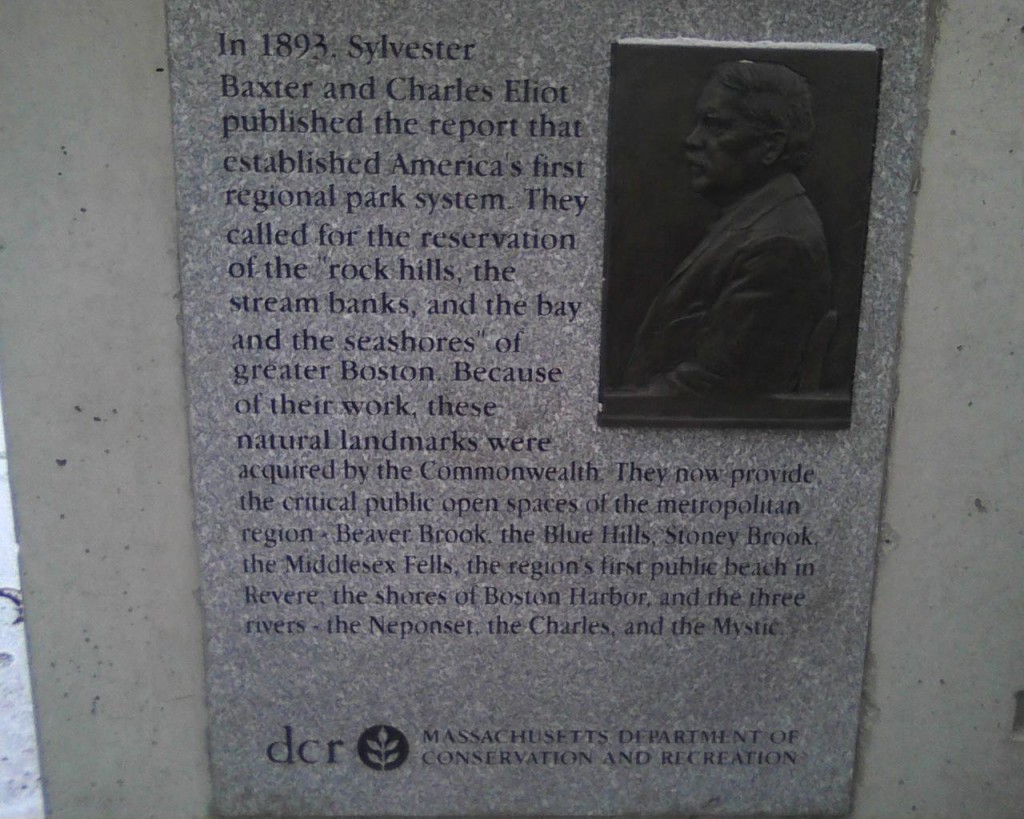 Well, what was I to do—lay down flowers? I snapped a picture on my low-quality phone, smiled to myself, and headed back to the Orange Line. It had been a funny sort of pilgrimage, and I felt a bit foolish now that it had been consummated. I would have to go back to the cold pen of the historian, and take up once again the businesslike work of transforming the raw material of Baxter’s words into the consumable product of chapters and journal articles, appropriately preserved in the lifeless Perspex embalming made from references and cool analysis. But for just a moment, I allowed myself to feel the crack which had opened in the centuries, large enough only to let pass the faintest recognition of another human whose thoughts have now shaded into my own, and to indulge in a kind of remembering flavored by the salt of imagination.