I arrived in Philadelphia by plane on Sunday afternoon, and by the time I’d finished the forty minute train ride (on the quaintly cash-only commuter line) and the twenty minute walk from the station to the musty-carpeted rented room where I’d be staying, it was time to arrange for dinner. Knowing nobody in the city, and disliking restaurants from both my wallet and my heart, I looked on the map for a nearby supermarket. The few which dotted the results page were far away, deep within the University of Pennsylvania’s shopping district, but, after pressing some more obscure search tricks into service, I found a listing nearer by, which one enthusiastic reviewer had judged “so cheap and so awesome and so friendly.”

I had already guessed that the Mantua neighborhood which stretched north and west from where I was staying was not known as one of Philadelphia’s upscale neighborhoods, based on the room listing’s emphatic insistence regarding the area’s safety (an insistence which, for instance, the Omni Hotel at Independence Park has no need to make). Besides, the reviewer on whose word I was undertaking this expedition noted the supermarket’s “rough area.” But I’ve strolled through enough disreputable neighborhoods to realize that “rough” is in almost all cases just a byword for “poor,” and, under the confidence of daylight I decided to cut straight through Mantua to the store. In any case, having not visited Philadelphia in more than a decade, I wanted to see its workaday provinces, rather than the blocks of Starbucks and craft-beer taverns which I did not expect would offer much of a contrast to the Chicago Loop where I’d just spent a week listening to my fellow geographers excoriate capitalism from the podiums of conference rooms named “Gold Coast” or “Crystal Ballroom.”

It was obvious as soon as I turned west on Mount Vernon Street from the door of the rowhouse that this was the sort of cracked-sidewalk, treeless street of exhaustedly slouching old buildings of the kind that had not yet been kissed by the painted lips of gentrifying reinvestment. But the view from the stoop didn’t quite prepare me for the intensity of the urban desolation which followed in the subsequent blocks. Whole stretches of rowhouses had been demolished, replaced by tattered garbage bags and rubble. Many others were midway through a gradual phase of ransacked obsolescence, and though their boarded windows indicated abandonement, the filthy mattresses and piles of clothes which I could see through a few swinging doorways suggested otherwise.

Despite the disused state of nearly half the buildings, Mount Vernon Street was not desolate. Far from it: on this warm Sunday afternoon, children were running everywhere through the streets, and competing stereo systems vied against each other from nearly every block. Teenagers and adults were lounging on wooden porches sinking precipitiously towards the streets below; shouts and laughs drifted from open windows. A boy zoomed around a corner on a rusty dirtbike which sputtered out of gas midway through the turn. A neatly-dressed old couple kicked aside an empty plastic bottle as they ambled down the sidewalk, looking like they were returning home from church. It was a street that in many ways was more fully alive, more energetically aware of the presence of a mislaid pedestrian, than the preternatural stillness that might be found in the arcs of garage-fronted mansions that line the culs-de-sac of our fashionable neighborhoods like faux-marble tombstones.

The reader will (unfortunately) not be surprised to learn that, as is the case with so many urban neighborhoods which have had money and jobs vampired out of them, the residents of Mount Vernon Street was almost without exception black. I hesistated to take photos, since I did not want to turn poverty into a scenic sport, choosing instead to say hello to as many people as I could—most of whom graciously, if ever so suspiciously, returned the greeting. Here I was the interloper, or indeed the outright foreigner, and any white person who sneers at the idea that black people might feel self-conscious in the lily-white corporate boardrooms or unversity classrooms of this country should take a stroll down Mount Vernon Street or one of the many others like it, and feel their own flicker of that same self-consciousness, albeit one thickly buffered by the layers of privilege that come with having an iPhone in your pocket and a friendly police department always a call away.

I got to the end of Mount Vernon Street and found that the supermarket was gone, along with many other shops on Lancaster Avenue. So I headed southeast, realizing with dismay that University City would be my only chance at groceries in West Philadelphia, when I soon noticed ahead of me a beautiful stretch of blooming trees. This seemed like an innocent-enough photo to snap, and I took out my camera as discreetly as possible. As soon as I’d taken the picture, an elderly black woman waiting at a bus stop said: “Do you mind me asking—why are you taking pictures of the signs?” I explained to her that I was taking pictures of the trees, since they were very lovely, and especially so since I had just come in a few hours ago from Chicago, where it had been snowing on Wednesday morning. I complemented her on the beauty of the trees and of Lancaster Avenue, which, I noted, made a good impression on a visitor who had not seen the city in over a decade. She thanked me for the compliment, but noted that “thirty years ago, you couldn’t walk on this street—it was all black people.” It wasn’t clear whether she meant “you” to signify me in particular or any person in general, but before I could protest, she went on: “Now, things are getting much nicer here, there are lots of Asians, even white people. Me and my mother, we bought a house thirty years ago, and we’ve kept it nice. But most black folks—they weren’t economical, you see. They didn’t keep their houses nice. So now lots of them are gone.”

I didn’t know how to correct this mistaken conclusion in lay sociology, which, coming from a woman who seemed genuinely proud of her civic attachment to the neighborhood, was just about heartbreaking. How could it be that a black woman, who by her own claim had seen the best and worst in this neighborhood, have come to take in the racist victim-blaming of the kind peddled in outright form on talk radio shows and in veiled form in the brochures of condominium developers? Who knows—perhaps she listens to these very talk radio shows; perhaps she felt vindicated in finally seeing the returns on her own “economical” homeownership. Whatever the reason, I told her I hoped she’d enjoy the sunny afternoon and moved along. 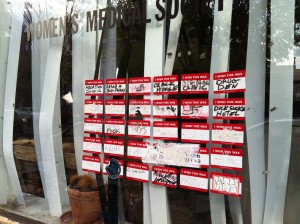 I continued down Lancaster Avenue, and came to a clinic which whose front windows peered into a sordid wreckage, a kind of stage-set abandonment. On the window was something that cheered me up: a matrix of stickers reading “I wish this place was …” completed in various ways, some childish, others hopeful: “Rehab & Bio-Pussy” or simply “A Better Place.” It seemed like a little twinkling of humanity, in all its dull humor and plaintive yearning, stuck on the face of decay. It was only after I got home that a little bit of reading turned up the gruesome reason why the clinic itself looked as if its proprietors had been raptured. It was the site of an unlicensed abortion clinic, raided by the FBI for the nightmarish conditions made possible by the desperation of poor and confused women. A hammer of revolt dropped down on me when I read through what had happened there, and I hoped that nobody had seen me taking the photo and mistook me for some perverted trafficker in the macabre.

Cry, cry the beloved community, and cry the beloved country while the streets of Baltimore burn! It is only a geographical trick we play in our minds, by which we imagine Mantua or Sandtown to be “elsewhere,” that allows us to let such conditions remain so long into this twenty-first century with its speaking watches and its Trump Towers. No member of Congress of any party would let the block they live in hollow out into a rot; no governor of any state would sit by while their own home town fell into nearly third-world poverty. It is only because we do not yet understand that these places are our neighbors, too, that we can delude ourselves into thinking that their fate is not also our own.