While there are many virtues which pull politically in one direction or the other—liberty to the right, sustainability to the left—there are a handful which have such an allure that everyone wants to claim them. Amongst these is “community.” And yet, in spite of the massive team of politicians, activists, intellectuals, artists, and citizens lined up on community’s side, we are still often led to believe that community is the underdog, or, more emphatically, that community is the inevitable casualty of history’s grand modernizing forces. We therefore find community perpetually under threat, menaced by a powerful cast of villains ranging from capitalism to bioscience to vulgar music. If only we could rescue it from these malign forces, we would undo and redeem modernity’s original sin—or so goes one line of thinking prominently represented in Western criticism.

In an important new book, Thinking Small, the historian Daniel Immerwahr enjoins us to reconsider this fawning attitude towards community. Asking scholars to “treat community with less reverence and with more curiosity,” and “to move it from the altar to the dissection table,” Immerwahr contends that a view which portrays community as the unchampioned, untested alternative of the modern age simply does not accord with the facts. He follows the political career of “thinking small” in the United States of the middle twentieth century, beginning with the embrace of country-town living by intellectuals such as E. B. White and Granville Hicks in the 1930s, then moving by stages through India’s American-backed panchayati raj village program, counterinsurgency schemes based on rural development in the Philippines, and finally back to the cities of the United States during the War on Poverty’s community action programs. It is a meticulously researched and beautifully composed piece of scholarship, all of which has enough force to render ridiculous the bedazzled reverence with which we too often approach programs undertaken in the name of community.

If, contrary to their supposedly bypassed status, community-focused policies were in fact widely popular and implemented at the highest levels of political influence in the middle of the century, one of the reasons, as Immerwahr notes, is that “community” is an incredibly evasive term. That evasive quality allows it to serve many political masters, some powerful, others inert, and others sinister. Part of this slipperiness—which Immerwahr demonstrates without ever explicitly stating—is due to the fact that community is often invoked together with a set of parallel variables that supposedly configure what, exactly, we are supposed to be imagining when we think of a “community.” The problem is that this set of variables is easily unbraided. Immerwahr himself has to confront this tendency of community’s qualities to fall apart in one’s hands. The book is, above all, a story about the troublesome politics of community. Yet it is titled Thinking Small. Are smallness and community equivalent? Must all communities be small? And what do we mean by small: of limited membership, of constrained geographic size, or something else? Is smallness alone sufficient to make a social grouping communitarian?

If the presence of “small” in his chosen title suggests one way that community awkwardly corresponds with its associated variables, one working title for the book—Gemeinschafted—suggests another (woe to the editor who nixed that priceless pun). Ferdinand Tönnies’s original formulation of Gemeinschaft und Gesellschaft, the former being the word that Germans use for some translations of our English “community,” is one of the original statements on the elusive nature of what makes up a community. For Tönnies, in addition to being small, the Gemeinschaft community was kin-based, agricultural, nonurban, and prescientific. But ultimately the term Gemeinschaft signified, in Tönnies’s view, the quality of a social bond whose characteristics were correlated with but not reducible to this set of parallel qualities: one which was notionally “organic” as opposed to regimented and instrumental.

It was already evident in Tönnies’s work that the set of binaries which lined up atop Gemeinschaft and Gesellschaft did not always perfectly stack. For instance, Tönnies’s student Otto Neurath advanced the ideal of a Gemeinwirtschaft which would use scientific knowledge and industrial techniques to rebuild the folk community for a modern era.1 Like Neurath, those who have stood up in defense of community have been forced to choose which of its cognate qualities are fundamental, and which are abstractable. Since there are thousands of ways of finessing that question, community has consequently become politically promiscuous. Thus, lined up on community’s side we can find everything from a left-wing optimistic modernism (in such figures as Dewey, Gropius, and Habermas) all the way through to the small-town racial paranoia of the Jim Crow South.

Perhaps most problematic for a geographer is the way in which “decentralization” has come to stand as one of the key cognate qualities of the communitarian urge. We may think that we can intuit the distinction between a centralized society and a decentralized one. But a scanty foundation lies behind this intuition. A centralized society can be centralized in the sociological-topological sense, that is, in which all social relations are dominated by a central node. But very often “centralization” takes on cognate variables of its own, usually borrowed from the material experience of the built environment instead of from a imaginary diagrammatic topology of social relations. “Center,” after all, comes from the Greek term for the sharp point on a compass, and so the centralized society comes to stand for one massed up in one location, usually the core of imperial power, where gather bureaucratic and administrative apparatuses which are the supposed usurpers of genuine community. By contrast, the decentralized society is imagined as evenly distributed across the landscape, with social life residing in small villages. 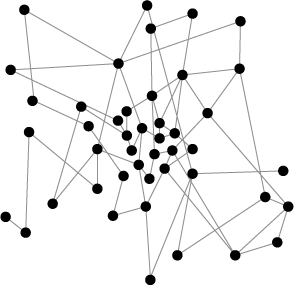 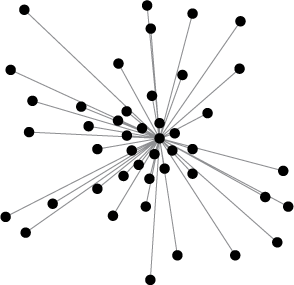 But that naïve definition rapidly breaks down when we are confronted with the vastly more complicated combinations of social relations and occupance patterns within which humans actually life. Consider the following two diagrams: 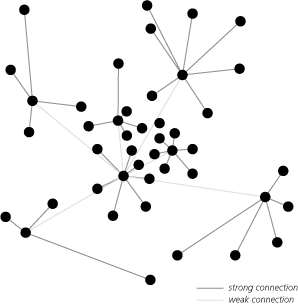 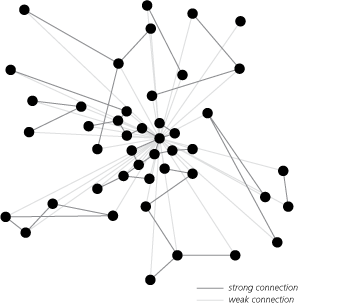 Which is the more thoroughly centralized? It is difficult to tell. Now consider the exponentially larger array of configurations which are possible in a world of billions, and consider too that in addition to the crude distinction between “weak” and “strong” bonds which I have used here, we could add many other relational characteristics: free and coerced, unidirectional and bidirectional … and so on.

All of this means that when we look historically at the “centralizers” and the “decentralizers”—particularly when we are looking at those who have explicitly sought to achieve their aims by regulating the landscape—it is not only difficult to figure out whether centralizers or decentralizers have the better claim on community, but also difficult to figure out which ones have the better claim to centralization or decentralization! To take just one instance: Benton MacKaye (who was a member, alongside Albert Mayer, of the Regional Planning Association of America) would canonically be included in planning history as a decentralist, since he praised small-town life and wished to rebalance industrial and cultural power away from large cities, which he considered to be the marks of runaway capitalism. Yet much of MacKaye’s supposedly decentralist vision was predicated on the notion that a more perfectly centralized social life could be found in the “organic” small town than in the fragmented, sprawling, and homogenized mass city. How, then, would we characterize MacKaye, an atheist, trained as a scientific forester, who praised folklife but spent much of his working life employed in the federal bureaucracy, and who strived to disarm the mass culture of the metropolis and recenter it in the town meeting? Centralist or decentralist, communitarian or bureaucrat, modernist or antimodernist? We can only concur with what Immerwahr calls a “principle argument” of his book: “the urge to modernize and the quest for community shared space, existing alongside or even within each other.” 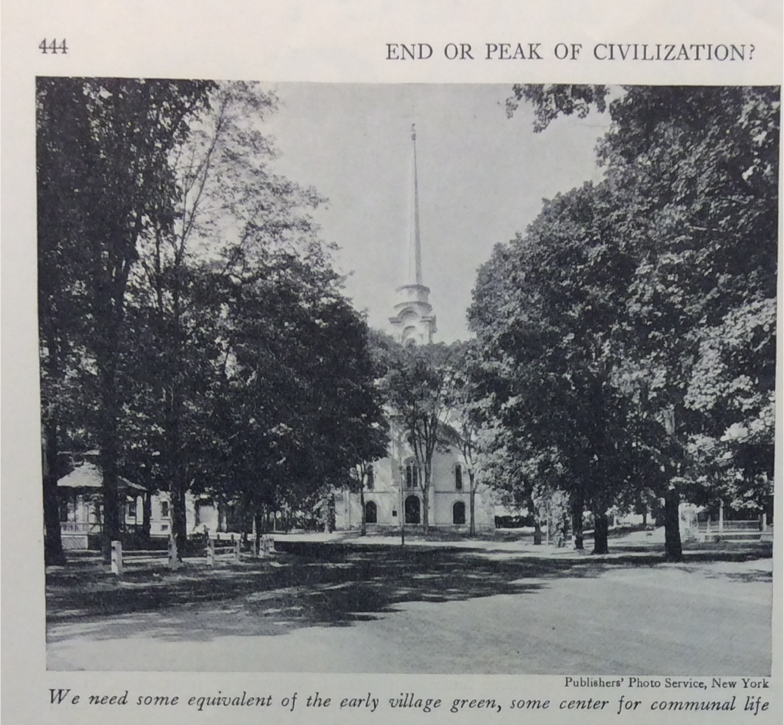 One detects in Immerwahr a plea to judge programs not on whether they are big or small, communitarian or bureaucratic, statist or participatory, but rather by whether they are good or bad. He notes that while India’s community development program was easily seized and coopted by local bosses, an alternative story played out in the state of Kerala, where there was little pre-existing village structure on which to draw. There, a centralized Communist government was able to bring living standards up to a standard higher than that of any other region in the country. It was an example of decentralized benefit achieved through centralized means—much akin to the American high modernist Rexford Tugwell’s assessment that “if most farm communities are to have democratic administration they will have to import it from Washington.” Implicit in this view is the argument that as certain structures have continued to massify—global finance and the carbon saturation of the atmosphere being two major examples—that a retreat into smallness might not only be misguided, but in fact contrary to the very values which “community” drags in its tow.

All of which is not to say that we should pivot from loving to hating “community.” Instead, we should recognize that because community is so universally sought-after, because it bears the weight of such desire, it is easy to refashion in a thousand different ways—many of which are at cross-ends and contradictory with each other.