Last fall, I wrote about an experiment in algorithmic partitioning using data from commuting patterns. It was a really interesting way to think about “natural” communities emerging from the stitchwork of human geography, and it suggested some interesting ways for thinking about how to empirically determine the edges of “unit” geographies.

Of course, there’s lots of data that can be fed into algorithms like these. So here’s another map of “natural” communities based on data from Boston’s Hubway bike-share system. 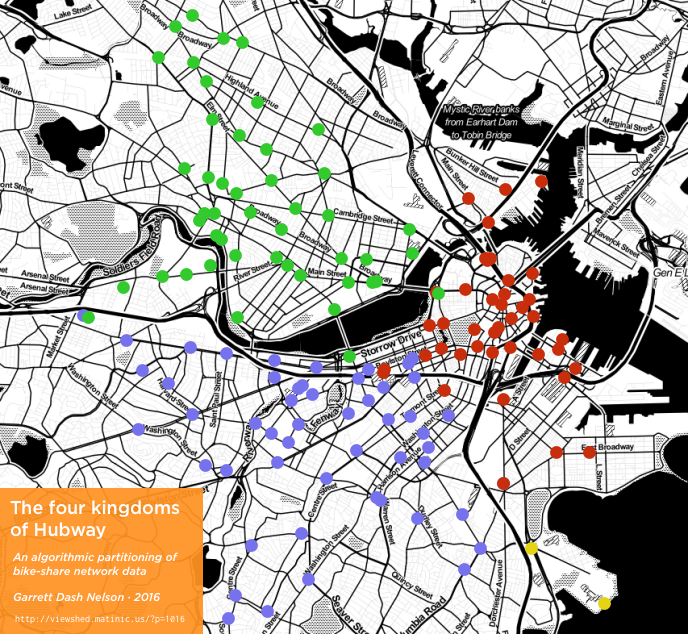 Again, what’s striking to realize here is that the partitioning algorithm is not considering any geographic data—it doesn’t “know” where in space these points are. All it knows is how strongly or weakly related they are to one another, which, in this case, is determined by how many bike trips are taken between one station and another.

And yet, even though the algorithm is ignorant of geography, it ends up partitioning communities which make a lot of sense in spatial terms. Essentially, it created four bike-sharing neighborhoods: Downtown/Charlestown (mapped as red dots), Outer Boston (purple), Cambridge/Somerville (green), and the fascinating Harbor Point-JFK mini-region (yellow).

A lot of these communities follow discrete breaks in the landscape. The Cambridge/Somerville bike region is well-defined as north of the Charles River and west of I-93, except for key entrepôt stations that connect this network to downtown at the Boston-side ends of the Longfellow and Harvard bridges. The Allston stations along Western Ave., which feed into the Harvard commuting zone, also belong to this Cambridge/Somerville domain.

Meanwhile, Charlestown’s stations are more related to downtown, across the river, than to neighboring Cambridge/Somerville, meaning that a fair number of these riders must be sneaking beneath the Zakim Bridge to cross at the Craigie Bridge, or else negotiating the bicycle-unfriendly Charlestown Bridge (or maybe hopping on the Navy Yard ferry?). Meanwhile, the downtown region breaks into an Outer Boston region almost perfectly along the Mass Pike.

Perhaps most interestingly of all, two stations—one at the JFK/UMass MBTA stop, and another at UMass-Boston, form an isolated community all by itself (sort of like Nantucket in the commuter map). This must mean that most of the people picking up bikes at the T station are taking them out to the university, and most of the people picking them up at the university are taking them to get on the train.