Gerrymandering and the whole community

The US Supreme Court’s decision to hear the Gill v. Whitford gerrymandering case is raising hopes that the judicial system will reign in the worst abuses of partisan electoral districting. Academics are partly to thank for the success of the legal challenge so far: the initial District Court ruling striking down the Republican-drawn map relied on the concept of the electoral “efficiency gap” metric developed by the legal scholar Nicholas Stephanopoplous and the political scientist Eric McGhee. It’s a clever and (hopefully) legally-defensible method for proving that gerrymandering schemes are not just unfair but also unconstitutional. But if the “efficiency gap” is useful in quantifying just how much of a partisan advantage is being squeezed out of tricky borderlines, it’s less useful as a method for drawing good districts.

That’s because in both the minds of ordinary voters as well as in the theoretical underpinning of the Constitution, what matters most about an electoral unit is that it should represent a group of voters who feel like they have something in common—that is, districts and geographic communities should match as best as possible. When we look at a gerrymandered map, what makes it seem so offensive is that its bizarrely-shaped geographies don’t follow the lines of any recognizably coherent cities or regions.

How do you statistically measure whether a map “looks weird” or not, though? And what exactly constitutes a geographically bound-together community of people, anyway? That’s a question for geographers, not for political scientists—and although it seems simple at first, it turns out to be surprisingly challenging.

One major wrinkle of the problem lies in the fact that every electoral district must have the same number of people. But states aren’t neatly divided into organic, self-contained cells each with the exact population necessary to form an electoral unit. For instance, imagine a state with one big city that has a slightly larger population than the necessary size of an electoral district. Some of that city is going to have to get lopped off and included with one of the neighboring rural electoral districts. But which part should get cut—and how do we choose in a way that doesn’t cross the line into devious political advantage-seeking?

Geographers have many methods for taking the complex weave of spatial interactions and empirically dividing them into segments—a process called regional delineation. You can look at commutes, banking and commodity flows, watersheds, or even sports franchise fandoms in order to divide territory up into areas that seem like they belong together. But because those areas of common interest may have considerably different populations, they need to be sliced up in a way that produces equally-sized districts. That’s a challenge that no purely-statistical approach has yet been able to unproblematically solve.

Nevertheless, the criteria of geographic likeness—essentially, a kind of neighborliness extended over large areas—ought to be the fundamental principle for combining people together for the function of electing their representatives. It’s a somewhat different criteria, however, than the one drawn from political science which emphasizes partisan symmetry as the highest principle. The goal of drawing districts to match real-life communities of interest doesn’t necessarily ensure that the districts match the overall partisan composition of the state. In fact, the opposite can sometimes be the case. Consider, for example, this imaginary state with four counties and two electoral districts. 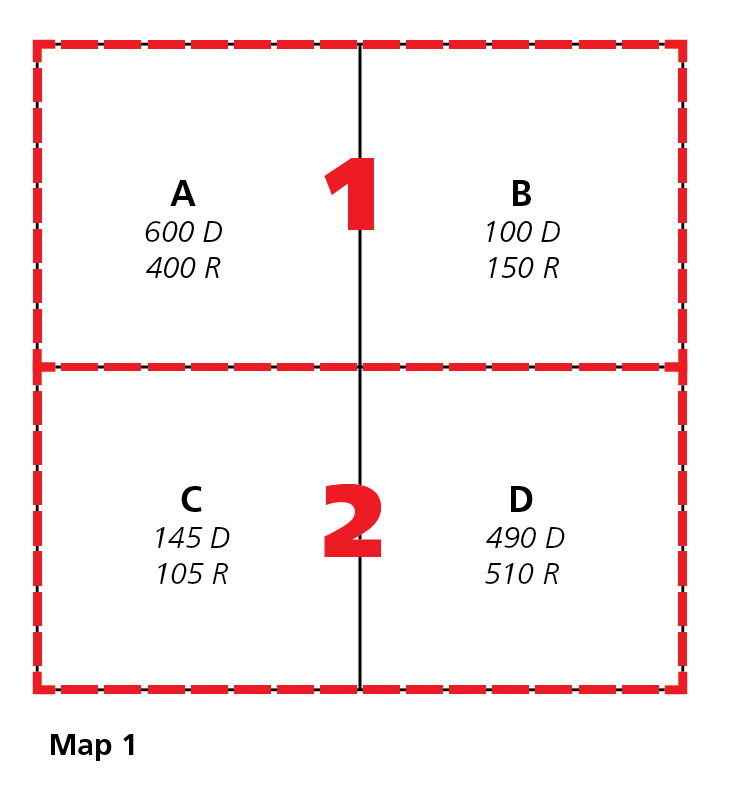 Right now, this state could be accused of a partisan gerrymander in favor of the Democrats. Although the state is close to even in its partisan makeup, with 53% Democrats and 47% Republicans, the Democrats win both districts. Here’s how the efficiency-gap calculation would break down:

The Republicans here have “wasted” all of their votes—leading to a colossal efficiency gap metric of 43%.

It would seemingly be much fairer, then, to draw the districts this way, so that the Democrats win the first district, while the Republicans win the second. 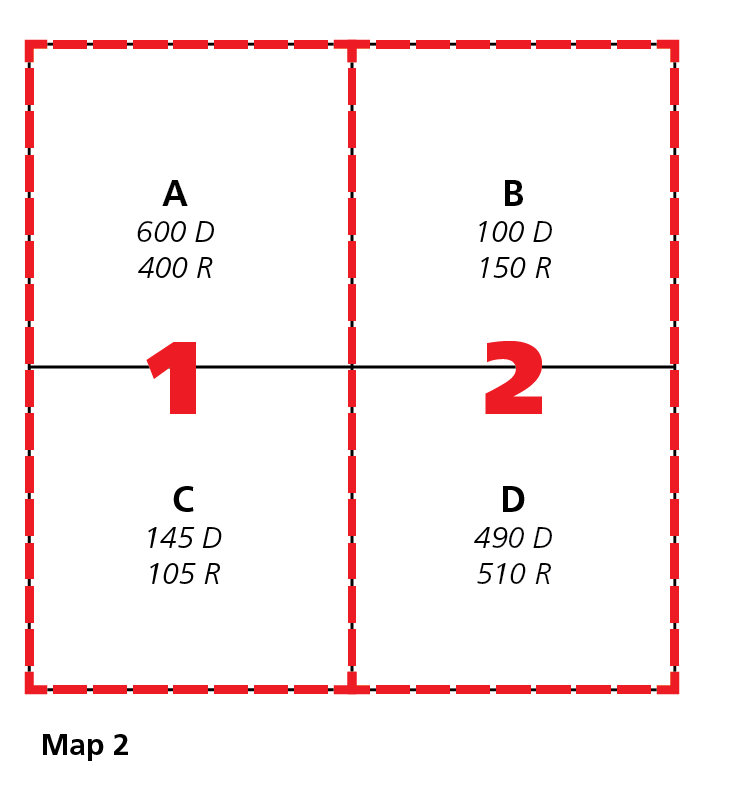 In this case, the efficiency gap is much smaller—just under 7%.

But so far the only information we’ve been working with is the raw, abstract partisan breakdown of the four counties. What if we added in some qualitative geography, and I told you that the imaginary state looked like this? 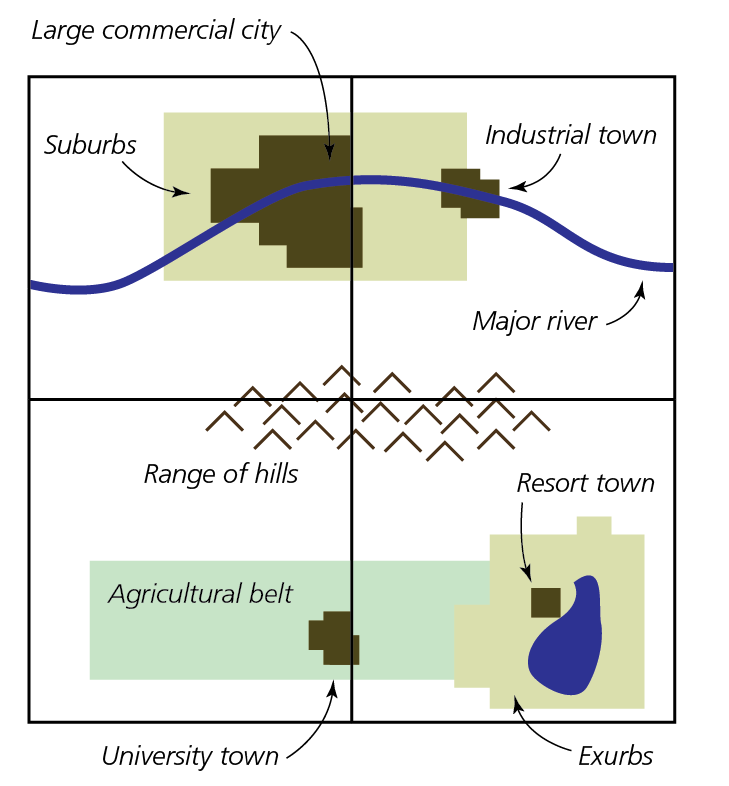 Suddenly the original electoral map—the one that seemed unfair at first—seems to make a lot more sense. Counties A and B seem to have a lot in common with each other in terms of economic and environmental relationships, and so do Counties C and D. Joining County A and C together, and County B and D together, violates the principle that places which are related to one another should vote together.

If the problem looks difficult in this highly-stylized imaginary map, imagine how much harder it gets when dealing with a real state, full of complicated cities and towns of every size, and overlapping, blurry regions of common interest. There are no perfect breaks like the range of hills in our fictional example above. No matter where a line is drawn, it will be cutting across somebody’s sense of their home region. The best geographers can do is to try to put the lines where they disrupt the fewest number of connections as possible.

One radical way of getting around this problem is to abolish the single-member district system altogether, and replace it with a system of proportional party-list voting like the kind found in many parliamentary systems. An even more speculatively experimental approach would be to organize “districts” on a basis totally separate from geography, like the Vocational Panels of the Irish Seanad. For instance, in an election for 100 seats, you could divide the electorate into income percentiles, so that the richest 1% formed a “district” with one representative, the poorest 1% formed another “district” with one representative, and so on for each 1% slice of the population. (This would have the extra positive effect of dramatically curtailing the top 1%’s disproportionate chokehold on Congress.)

But so long as we have voting aggregated into geographic containers—which will almost certainly continue to be the case in the US—we should make sure that those containers feel like they make geographic sense, regardless of their partisan composition. Empirical studies of spatial relationships can provide a first step for determining what places belong together. After that, one useful process would be to ask people to draw the outlines of their own communities on a map, and try as best as possible to make electoral borders follow the lines where people imagine a break in the human landscape.

Whether it’s statistical data or participatory research that drives the delineation of sensible regions, though, one seemingly-trivial reform could help force districting commissions to justify the logic of their line drawing: giving districts regionally identifiable names. Instead of a colorless administrative term like MO-4, why not call it, say, the Osage Plain District? It would be almost impossible to think of a regional term to capture the regional identity of an extreme gerrymander like PA-7. That in itself might not be enough to stop craven politicians, but it would at least start getting citizens and voters to think about their electoral constituencies and their imagined regional communities in the same context.

For all its legal utility in possibly convincing the courts to strike down gerrymandering, the “efficiency gap” doesn’t actually tell us much about whether an electoral district coheres together geographically or not. The cultural geographer Carl Sauer wrote a critique of gerrymandering in 1918 which focused on how crazy electoral lines broke apart communities and thus crippled their ability to act as political entities. “The interests of representative government demand that such a crystallized opinion be given a voice,” Sauer insisted, and “that it be not concealed by the division of the natural unit.”

Sauer was wrong to think that there are perfect “natural units” that correspond in size to electoral districts. But he was right to say that one crucial function of an electoral district in a democratic system is not merely its role in partisan politics, but in the way that it gives a local community representation in the larger political entity. To preserve that function, we need an understanding of geography that is made up of something more than just red and blue dots.