When the roads run together

The first time I ever got seriously lost in a car was in high school, coming home from Boston. I knew how I was supposed to get home: Route 2 out to Route 128 north, then Route 3 the rest of the way home. Little did I know that Route 128 didn’t exist any more—or, rather, that it did exist, but that its signage and indeed its very existence had been swallowed up by I-95. We flew past the exit for I-95, since that wasn’t what we were looking for, and before we realized that “128” was just the Baby Boomer way of saying “95,” we were out in Concord and thoroughly disoriented. 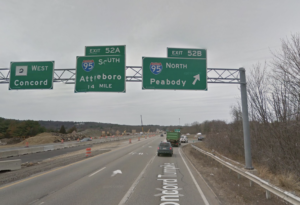 Like may cities that had urban collector roads before the advent of the Interstate system, Boston’s 20th-century express highways grew haphazardly. Older roads were turned into divided highways a few stretches a time, before midcentury redevelopment schemes razed entire neighborhoods to build multiple-lane super-bypasses. Unlike in the tidy grid cities of the west, the messy knot of old and new highways in a city like Boston doesn’t lend itself easily to a logical system of route numbering. So Boston transportation planners traced a series of numerical routes onto the highways that already existed, preserving as much as possible both the continental framework of interstates (I-90 the northernmost east-west highway; I-95 the easternmost north-south highway) and the existing heritage of local route numbers that long predated it (like Route 2, the colonial path from Boston to Lexington and Concord). And in a few places, a single road could share several numbers. Route 128, long synonymous with Boston’s major circumferential highway, was eventually gobbled up by other route numbers.

These concurrencies have always interested me because of the way that the topology of the numbering system bears so little resemblance, in many places, to the actual experience on the ground. If you are headed south on I-93 in Canton, you are actually traveling west. Then, without turning off the road, suddenly you will find that you are on I-95 north, MA-128 north, and US-1 south all at the same time (and you will still physically be headed mostly west). Similarly, for a short stretch near the Burlington Mall, you may find yourself tracing I-95 north and US-3 south at the same time, not to mention MA-128 north (a road whose final destination will be due east of you in Gloucester).

Topology is best represented on a stylized map that sacrifices real-world geometry in order to emphasize how points are connected together (this is the cartographic assumption behind most subway maps). Since it’s almost impossible on a regular old road map to visualize how Boston’s crazy system of concurrencies is set up, I made a topological map of it (click for a larger version): 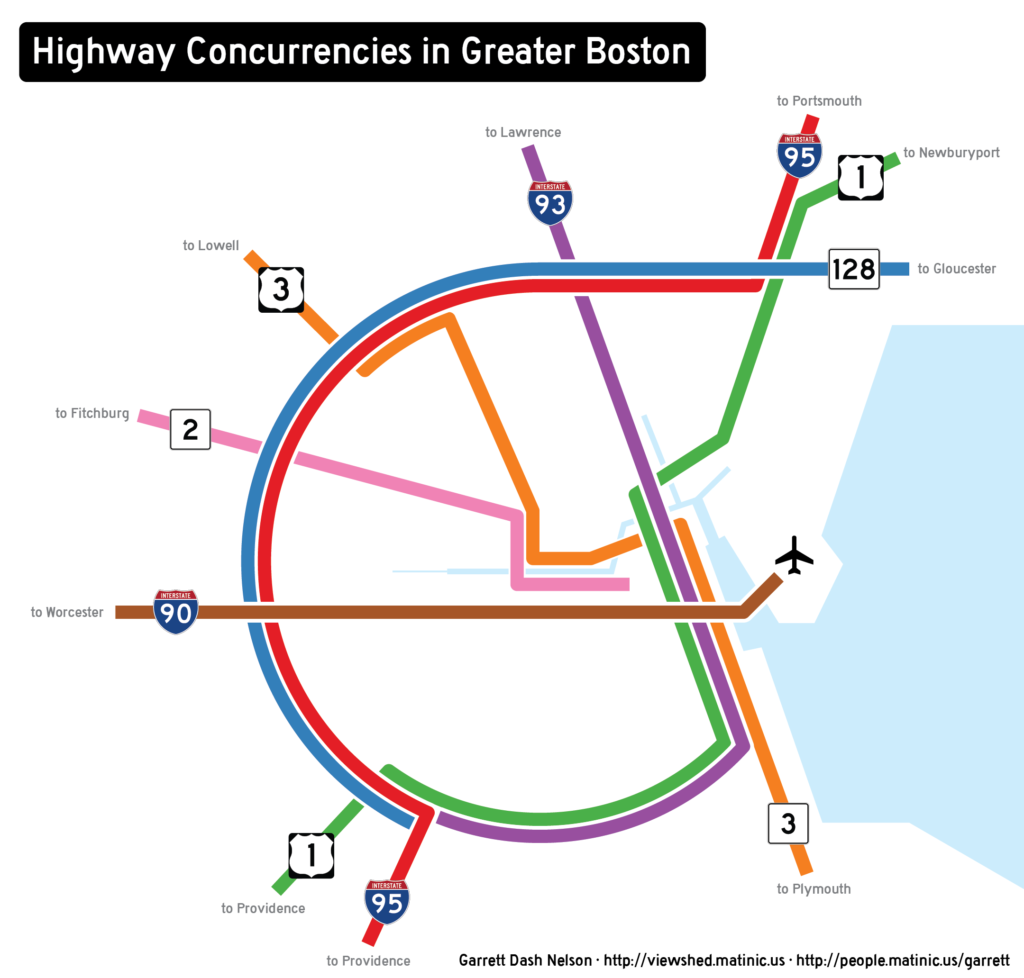 Concurrencies can be both major (I-95 swallowing up 128 from Canton all the way around to Lynnfield) and minor (US-3 and MA-2 are buddied up only from Fresh Pond to the BU bridge). There’s even one not-truly-a-concurrency shown here, where I-95 and US-1 run right next to each other, but on their own roadways, through Peabody and Danvers.

I’d welcome suggestions! If anyone knows of other interesting concurrencies that should be shown here, please let me know. There is some debate about whether MA-2 ends at Boston Common or whether it jogs north at Charles St to finish its route at Charles/MGH Station, where it would re-meet MA-3, the latter having just crossed the Longfellow Bridge.