In search of the geographic discount factor

Economists have a handy tool known as the discount function, which attempts to capture the preference of individuals to have something now rather than something later. The weight which an individual places on present utility compared to future utility is known as the discount factor, and it forms the underpinning assumption for a number of economic theories. The discount function determines interest rates, and it also explains the apparently irrational tendency of individuals to choose immediate consumption over investment that would yield more consumption in the future. More recent behavioral-economic research has pointed to the ways in which sociocultural contexts shape the individual’s future-orientation and trustfulness, both of which consequently shape the discount factor.1

From a variety of theorists, ranging from Von Thünen to Einstein, we know that time and space are fundamentally interrelated. What is far away takes longer to get to than what is close at hand. Thus, there is already a time-discount factor at play in economic decision-making, since something which is currently at a great distance will take some time to arrive at you and will thus be discounted in time. In addition, the cost of transportation increases correspondingly with distance; these time-spatial factors together form a core research interest of economic geography.

I wonder, however, whether there is a more basic behavioral “geographic discount factor” which may be worth examining in detail. Time-discounting isn’t just interesting because of the way it determines interest rates; instead, it’s interesting because it provides a way to understand how an individual assigns value (whether narrowly economic or more broadly utilitarian) across different time-states. We are just as likely to privilege the spatially close-by as we are to privilege the temporally immediate, and not simply because the former is welded mathematically to the latter via d = st. What is spatially near is more affectively accessible to our consciousness; it registers and pulls harder on our value system. This common-sense function sits behind the saying “out of sight, out of mind,” and also behind the politics of NIMBYism.

Yet the concept of a geographic discount factor doesn’t seem to have yet been consolidated, either by geographers, psychologists, or economists. Charles Perrings and Bruce Hannon are two of the few to use the term “spatial discounting,” arguing that “preferences over space can be summarized in a rate of geographical preference and implemented through application of a spatial discount rate.”2

Perrings and Hannon’s article is an important definition-builder and agenda-setter, but I worry that, in the search for econometric-model suitability as well as an “ethically neutral” rate “which exactly compensates for the effects of difference,” they frame the geographic discount factor too instrumentally. This leads them to make the assumption that “spatial effects decay smoothly, continuously, and monotonically,” an assumption which they admit is “strong” but nevertheless preserve throughout their discussion.3

In fact, the geographic discount rate is importantly discontinuous, for there are certain geographical features at which our moral imaginations are programmed to naturally break. The most obvious of these are political border-lines, which very often interrupt our sense of mutual identification. But there are many ways in which sympathy extends across an uneven geography: for instance, a coast-dweller might associate far more with his fellows far along the coast rather than his neighbors just a few miles upland. I use the word “sympathy” deliberately here, for the sense of sympathy and the moral extension of value across space are fundamentally interrelated.

Thus the geographic discount curve is likely to look something vaguely like this, a discontinuous function with prominent breaks: 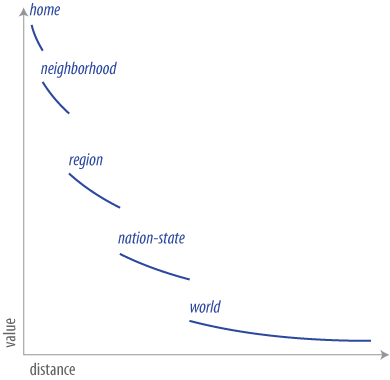 Looking at this one might first think that the breaks in value follow the breaks in place, which are themselves breaks in scale. I think there’s an interesting insight, however, that comes from reversing that causality. What if it is the breaks in value which cause the breaks in place and in scale? That is to say: what if the concept of territory, rather than being a pure confection of political and juridical power, emerges instead from the edge-producing effects of discontinuities in a society’s geographic discounting?

After all, with the exception of the nation-state, the breaks I’ve sketched out in the generalized model above aren’t politically-discrete boundaries. Nor do they necessarily exist materially in the world—a region might have a physiographic feature marking out its edge, but might just as well not. Instead, these concentric geographic units of where one is, which is to say the creation of unit territorializations, might well emerge from these jumps in sympathy, these discontinuous breaks in a mental schema of spatial discount.