The United States is already like Scandinavia—well, part of it is

Bernie Sanders’s repeated reference to Scandinavia (and Denmark in particular) as a social and economic example which the United States ought to emulate has brought wider attention to the “Nordic model” as a template worth paying attention to as we Americans puzzle over what to do about income inequality, climate change, and how to live in a post-scarcity society. The Nordic states have loomed large in the minds of American liberals for much of the twentieth century; from Olof Palme’s activism against the Vietnam War to Finland’s much-lauded educational equalitarianism, their social politics seem as close to an actually-existing model of utopia as the world has ever come.

Which may all be true if you’re comparing the United States as a whole to a single country like Denmark. But what if we analogize the Scandinavian countries to individual U.S. states, rather than to the entire country?

The Nordic region, in relation to Europe as a whole, consists of smallish, highly developed, wealthy nations with economies that are increasingly concentrated in the creative, service, and tech sectors. It’s also known for a frigid climate, and wearing sweaters.

In terms of population, New England is even smaller than the Nordic region as a whole … … and even more densely settled. … as well as in the fraction of the population with a postsecondary degree. The comparison doesn’t end with statistical similarities. Both regions helped pioneer reforms that eventually spread outwards to their neighbors (for example: New England launched the free public school movement; the Nordic countries were amongst the first to experiment with generous parental leave policies). Both are culturally rooted in a communitarian religious tradition (Congregationalism and Unitarianism in New England; Lutheranism in Scandinavia), but have since become some of the most religiously unaffiliated societies in the world. And so on.

I don’t intend this to sound self-satisfied—since I’m a New Englander, and a descendant of Scandinavians—myself. There is much to criticize in the traditions of both regions, whether it be the cultural snobbery of New England or the currents of ethnic nationalism now stalking the margins of Scandinavian political discourse. Both regions need to answer some very difficult questions about how to preserve the spirit of their social values while not retreating into a fossilized cultural conservatism. And no person should ever take retreat and satisfaction in a little walled-off utopia while forgetting that the world is made up of fellow-humans to whom we must extend our moral obligations.

Still, though, if we think about New England as a kind of laboratory of political ideas, serving for the United States in the same function that the Nordic countries have served for Europe, I think we would do useful work in drawing liberals’ attention back to the very important work that can be done at the regional and local level. It would be wonderful if the United States as a whole were on the verge of the political enlightenment that Sanders claims to presage, and ready to embrace social democracy at a national level. I fear, however, that great swathes of the country are not yet ready—or willing—to go there. Until they are, however, the states—which are far less constrained than the federal government by a restrictive constitution—must experiment with working models of the “great community.” 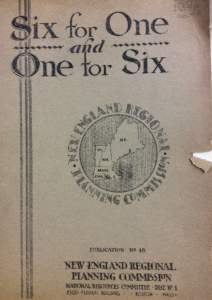 The Nordic Council was formed in 1952 as a way to promote intergovernmental cooperation amongst its five member countries. New England has a Council, too, but it is little more than a business lobby. New England needs more programs like the Regional Greenhouse Gas Initiative which represent more substantive attempts to coordinate action amongst these six states. In 1937, the New Deal-era New England Regional Planning Commission published a plan entitled “Six for One and One for Six,” encouraging the states under its purview to recognize their interdependencies and begin to plan as a whole. It is a good motto under which New England could lead the way towards showing Americans the principles of social democracy can work here, too.