Last week, Twitter took notice that Outback Steakhouse seemed to be planning to cover the United States in an occult pattern of pentangles:

From Arizona to New York, there was the proof on the map: Outback’s owners were laying down franchise locations in five-pointed stars. It was all a joke, of course. (Well, don’t write off the possibility that the restaurant’s recipe books are based on the Kabbalah.) But there is actually a sliver of geographic theory in those stars.

One of the most famous works in statistical geography is the German geographer Walter Christaller‘s 1933 book Die zentralen Orte in Süddeutschland, which was translated into English in 1966 as Central Places in Southern Germany. Christaller was interested in developing a theory for why towns and cities appeared in certain places, and he wanted to do so in a why that followed the scientific method of laws and principles. “The crystallization of a mass around a nucleus is, in inorganic as well as organic nature, an elementary form of order of things,” Christaller wrote in the opening of his book. Christaller believed that human settlement patterns obeyed the same systematic geometries as those found in minerals or atoms. 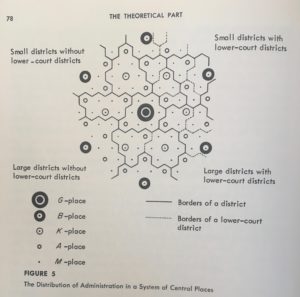 Christaller’s conclusion was that central places formed a roughly hexagonal structure, with mid-size towns orbiting larger central places. A hexagon, after all, is the most efficient manner of dividing space into equal partitions, which is why it is found in many places in nature—like honeycombs or films of bubbles. Christaller’s hypothesis was that across many different variables of geographic centralization and hierarchy—whether the marketing of commodity goods or the location of district courts—the structure of human geography would work itself out into hexagons, especially in the absence of interruptions like coastlines or mountain ranges. 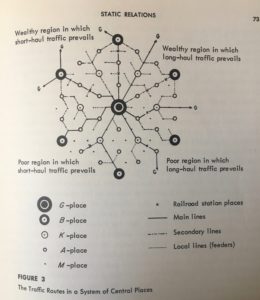 Christaller’s theories became influential on what was known as the “quantitative revolution” in geography in the 1960s and 70s, when the discipline started becoming obsessed with using computing power and mathematical theories in order to make geography more like the empirical sciences. As geographers turned away from the quantitative revolution in favor of more social-theoretical and qualitative approaches, Christaller fell off of most reading lists. (The link between Christaller and Nazi theories of geography also made him a suspect figure.) All that most people know about Christaller today—if they know anything at all—are his hexagons. 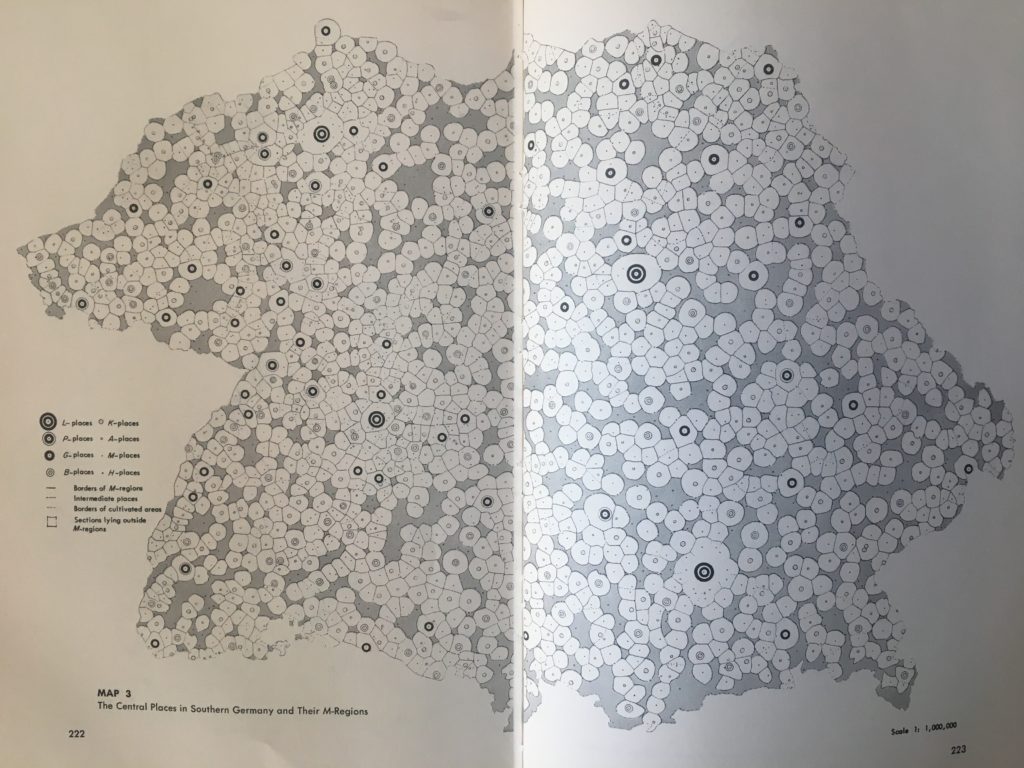 But Christaller recognized that it wouldn’t alway be a perfect hexagon that formed from the subdivision of space; sometimes a center would radiate into five spokes, sometimes eight. Which brings us back to our Twitter maps. If you’re going to locate some totally interchangeable retail establishments—like, for instance, Australian-themed middlebrow restaurants—in some relatively featureless, flat landscape—like, say, Mesa, Arizona—you’re likely to do it in a pattern that’s hexagonal or pentagonal. In fact, I wouldn’t be surprised if Outback’s head office has some sort of GIS model that suggests where to locate new franchises that relied at least in part in statistical assumptions drawn from Christaller.

The conspiracy then, isn’t the Satanists running Outback’s franchise-planning department. It’s actually lies in the kind of centralized, standardized economic system which spits out endless repetitions of the same consumer establishments onto endless repetitions of standardized suburban sprawl. Ironically, one of the reasons geographers turned against Christaller’s ideas was the fact that he seemingly ignored the specifics of local context, flattening out space into a dull geometric tessellation. Which is exactly the world as a chain restaurant sees it.