The Pennsylvania Supreme Court handed down a new map yesterday for the state’s US congressional districts in the League of Women Voters v. Commonwealth of Pennsylvania case. Having found that the 2011 districting plan “was a partisan gerrymander and that this gerrymander was extreme and durable,” the court redrew the state’s 18 House districts, wiping out the convoluted, crazy-quilt map that the Republicans drew to maximize their partisan advantage.

The net of this is that the Democrats are expected to gain a few of Pennsylvania’s House seats. But although we can score a map in terms of partisan balance after the fact, partisanship isn’t supposed to be one of the variables of consideration when drawing a map in the first place. Ideally, an electoral district should match what electoral law calls a “community of interest”—a group of people with some sort of shared sense of community belonging, tied together by geographic, economic, cultural, and political connections. You might think of it as neighborliness, broadly defined. However, it’s very difficult to define what the geography of such a community actually looks like. In practice, districting boards usually just resort to trying to keep municipalities and counties inside a single district wherever possible—a good, but very rough, approximation of the “community of interest” principle.

One way of getting a statistical trace of “communities of interest” is by looking at the threads woven by commuter geography. The connection between a person’s home and their place of work is one of the most significant spatial patterns in terms of economic interdependence (you earn your paycheck in one place, pay your mortgage and buy your groceries in another); infrastructure planning (you need roads, buses, and trains to get you from one place to the other each day); as well as the imagined geographies of belonging (the vast majority of a person’s time is spent at home, at work, or shuttling in between the two).

So what if we overlayed Pennsylvania’s districting map onto the webwork of its commuter patterns? In the science of networks, there’s a statistic called modularity. It measures how well a proposed slicing-up of a network respects the internal pattern of connected threads. If you sliced up a network and didn’t cut any threads at all, you’d have a modularity score of 1. In the terms of this example, this would mean that everybody lives and works within the same electoral district, that nobody has to cross an electoral district line to get to work. Given the massive complexity of commuter connections, that’s impossible—there are people who commute across all corners of the state. But, in the aggregate, a high modularity score means that a partitioning scheme does a good job at preserving the structure of commuter geography; by contrast, a low modularity score means that more commutes are being severed, and should give us a clue that gerrymandering is taking place and “communities of interest” are being disrupted.

I decided to run some modularity statistics on these electoral maps. In doing so, I’m ignoring partisan and racial composition, and instead focusing on trying to keep places that are connected together within the same electoral district as much as possible. Because districting must take place within the borders of a single state, we have to throw out all of the commuters who either live in Pennsylvania but work elsewhere, or work in Pennsylvania but live elsewhere. That leaves about 5.1 million commuters, about 4.5 million of whom live and work in different Census tracts (the remaining 600,000 live and work in the same tract).

Here are two maps, each showing the massive web of commuter networks in Pennsylvania. The first map has the 2011 Republican gerrymandered districts drawn on top of it, and the second has the newly-mandated plan. 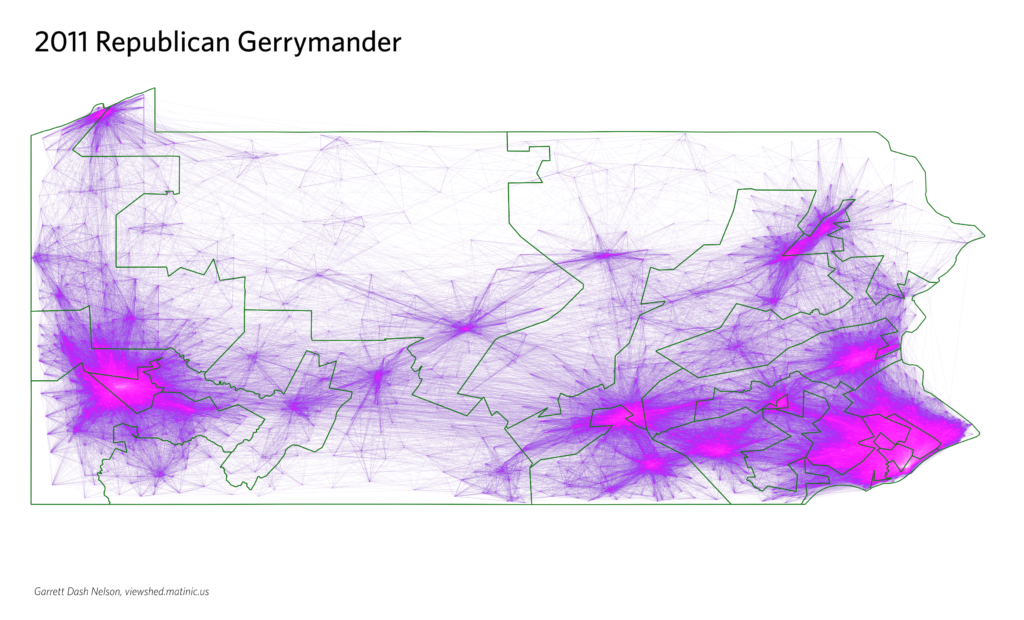 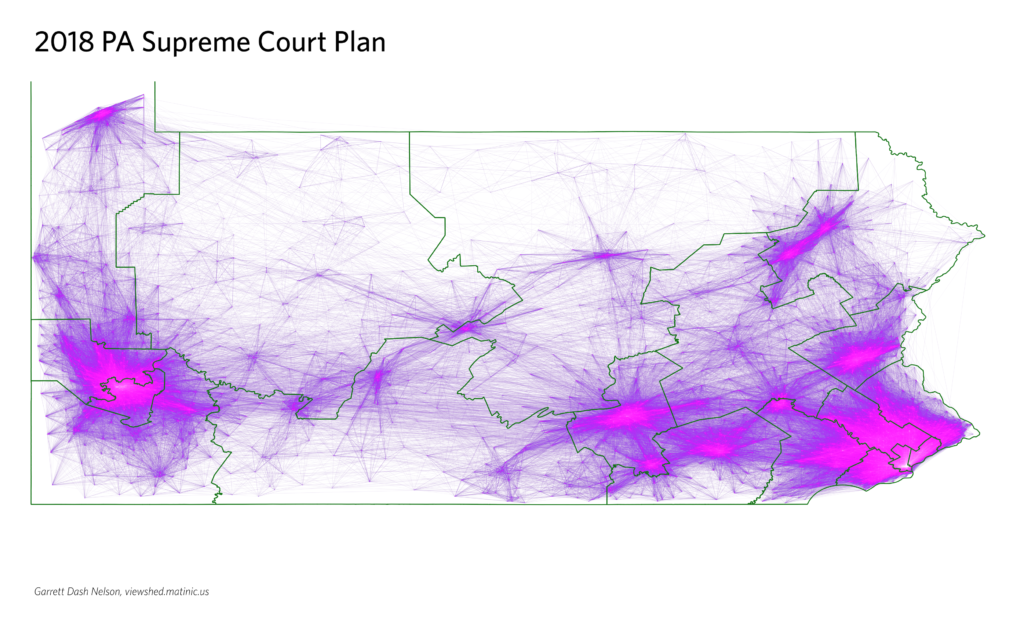 We can also color-code these maps based on whether commutes are contained within a district or whether they cut over a district line. In these two maps, commuter lines are red if they cut across districts, and blue if they stay within a district. You can think of the modularity score as a comparison between the blue and red lines—more blue lines are better, and they give a higher modularity score. Don’t forget that longer-distance commutes are much more likely to cut across districts, so there’s a visual bias in these maps towards red commutes; the many shorter commutes are more likely to be blue. 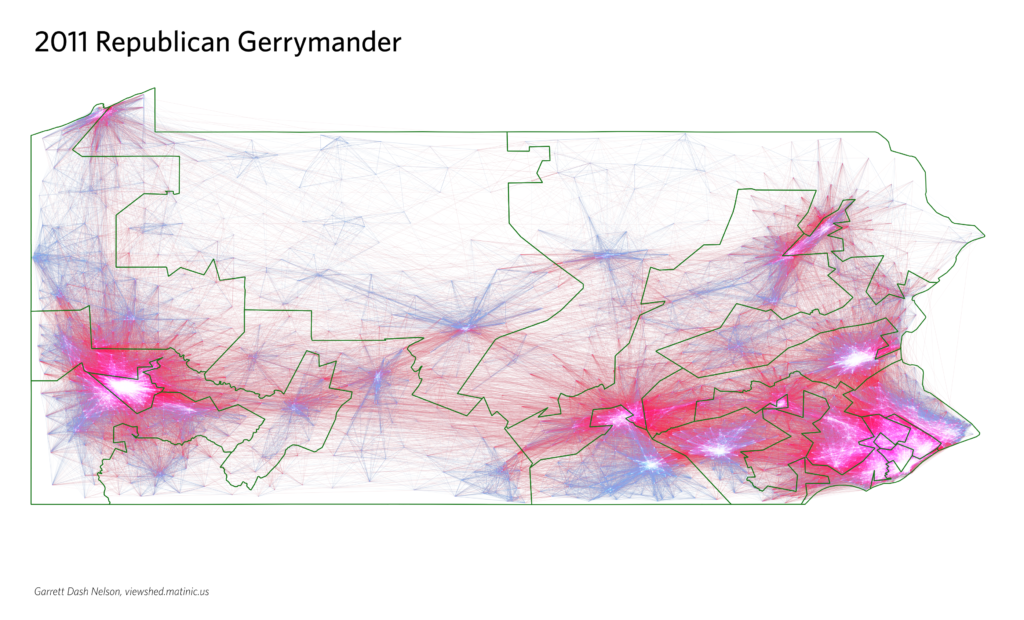 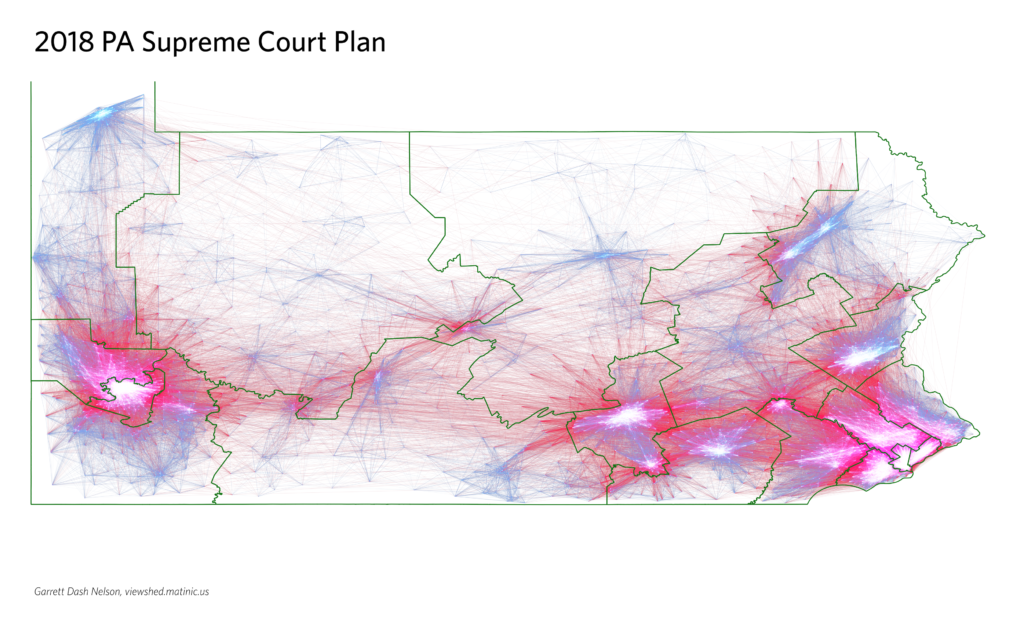 Look at the area around Erie, in the state’s northwest corner, to see a striking example of how the new map does a better job at preserving communities of interest. Whereas the gerrymandered map sliced the city of Erie right down the middle and produced a lot of criss-crossing red commutes, the new map keeps Erie and its commutershed all within the same district, which shows up as a much bluer commute-region.

Now, the big reveal: the modularity score of the 2011 Republican gerrymandered map is 0.58. By contrast, the newly handed down Supreme Court map has a score of 0.65. That’s a big difference, especially when considering that modularity scores around 0.7 typically indicate a strong community structure. So there’s statistical evidence to show that the new map does a much better job at preserving the community structure traced out by commutes. For comparison, Bobby Big Wheel’s proposed fair map scores 0.66, even just a little bit better than the Supreme Court map. (A technical note—I used Tiago Peixoto’s graph-tool to compute modularity, and the national commuter data set from the 2016 commuter megaregions paper that Alasdair Rae and I published in PLoS One.)

I’m working on running this statistic on a number of other proposed districting schemes, to see whether “gerrymandered” versus “fair” maps can also be evaluated in terms of their match with the network structure of commutes. Two teasers: first, the gerrymandered Wisconsin state house map that is at stake in Gill v Whitford gets a worse modularity score than the pre-gerrymandered map (although the effect is not as large as in the Pennsylvania US house map.) Second, the state with the “best” districting scheme—according to this statistic—is Indiana, which does in fact have a nicely-laid out series of districts that each center around one of the state’s major urban areas.

There’s much more to think about here, of course. There are some data caveats (for example, the borders of Census tracts usually, but not perfectly, match up with the borders of congressional districts). And commuter structure, though it’s a good proxy for connection, certainly doesn’t capture all of the geographic threads that knit together a spatially-defined community. Beyond that, there are many complicated tensions between “communities of interest” and other desirable principles in single-member districting, the most important of which is the representation of minority interests. More on all this in some publications to come!